I would like to dedicate this, my 200th post on this blog (so WordPress tells me), to Jerry Wallace, Coolidge historian extraordinaire, who was kind enough to send me, as additional informative material on my recent blog post on presidential reading matters, an essay on “A Neglected Bookman: Calvin Coolidge” by David Chambers Mears. Mears, formerly chief of the manuscript division of the Library of Congress, and later editor of Abraham Lincoln’s papers, worked at the White House in the 1920s to arrange and sort president Coolidge’s private book collection. I would like to share one little anecdote contained in the essay that addresses the erroneous assumption that Coolidge did not read much for pleasure.

Mears quotes Dr. A.S.W Rosenbach, who related the following revealing episode to the American Antiquarian Society. Coolidge had been a member of this Worcester, Mass.-headquartered Society since 1925, and became its president in 1930. Rosenbach was an avid antiquarian and collector of books who went on to help assemble the extensive collections of the Huntington Library and the Folger Shakespeare Library.

Mr. Coolidge was interested in the news of the world. He read of the sale in London of the original manuscript of “Alice in Wonderland” which I had purchased. On my return from abroad in May, 1928, the President asked me to lunch at the White House and to bring along the manuscript. I found that “Alice in Wonderland” was one of his favorite books, that he was interested in Shakespeare, that he liked to own good editions. He asked me details of the first publication of “Alice in Wonderland” and I tried to explain to him that the first edition, issued in 1865, not being altogether to Carroll’s liking, was suppressed. “Suppressed?” said the President, “I did not know there was anything off-color in Alice.” 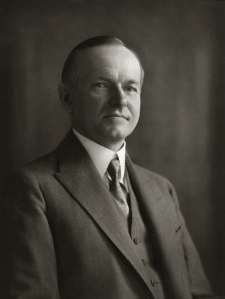 In celebration of Presidents’ Day, here are links to three articles – f i r s t , here’s historian, Coolidge scholar, and occasional reader and commenter on this blog Jerry Wallace with an all-new article on the timeless values of Calvin Coolidge,

s e c o n d, one of my all-time favorites by economist Robert Higgs, cautioning against the notion of presidential greatness,

and t h i r d, a short vignette by Amity Shlaes, highlighting Coolidge as a paragon of the forgotten virtue of thrift.

And what did Coolidge himself have to say? I’ve always loved his quote, “It is a great advantage to a president, and a major source of safety to the country, for him to know that he is not a great man.” I read this to mean that Coolidge had a healthy appreciation of his own shortcomings, and a wise understanding of the Founders’ conception of a president’s function – not as a supreme visionary and great mover and shaker of things, but as a more humble functionary “doing the day’s work” and letting the people go about their own business.