There’s a charming blog post over at the Salvaged Grace blog, about beautiful Sea Island off the Georgia Coast south of Savannah. This is one of Georgia’s barrier islands, also known as the Golden Isles.

The Coolidge connection to Sea (and Sapelo) island is as follows: Industrialist Howard Earle Coffin, a founder of the Hudson Motor Car Company, had previously acquired Sapelo Island as a private retreat. Then, Coffin began buying tracts of land on St. Simon’s island, and later purchased all of what was then Long Island, before renaming it Sea Island. Envisioning early on that the automotive revolution would transform the previously fairly inaccessible Georgia coast into a tourist destination, Coffin built 20 miles of roads, repaired and improved the causeway to the island, then enlisted designer Addison Mizner, known for his “Spanish Colonial Revival” style work in Palm Beach and Boca Raton, for the Cloister hotel and thus began the development of  Sea Island into a resort that today is still owned by the descendants of Coffin’s cousin.

Coolidge visited the newly opened Cloister hotel during the 1928 holiday season. With his wife, he also had been a guest at Coffin’s private retreat on Sapelo Island, joining his host and other guests on hunting and fishing outings. Apparently, he went hunting for only the second time in his life on Sapelo Island and was elated when he bagged three pheasants and two wild turkeys which he carried home personally. Coffin had rebuilt and extended the island’s south-end mansion into one of the most palatial homes on the coast; it became known as The Big House. During the Coolidges’ 1928 stay at the mansion, their portraits were painted by Salisbury. 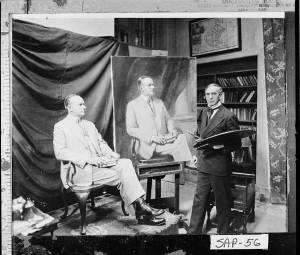 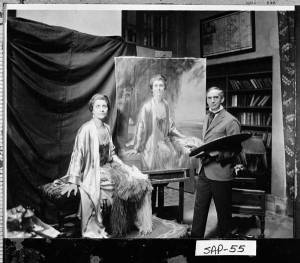