A recent post at sheds a long overdue light on scientific research into the importance of dogs in politics. If only Mitt Romney had known about this earlier! And now we know one more reason why Calvin Coolidge often was seen accompanied by dogs – the clever Vermonter must have known about the payoff in popularity even then. 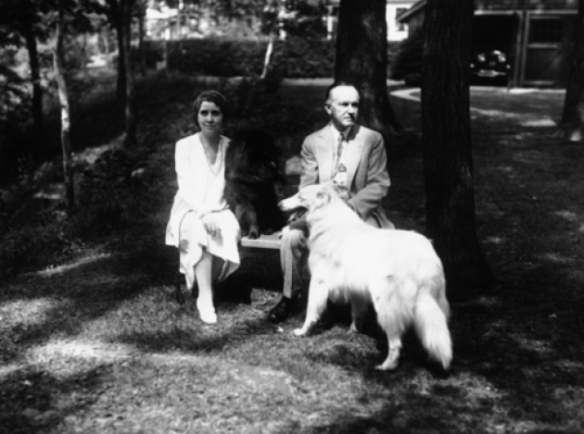 Calvin Coolidge, by reputation the quietest of presidents, quietly passed away on January 5, 1933 – 80 years ago this Saturday. In last year’s post on this date, I quoted one of his biographers on the events of that morning. The following quote is how Mrs. Coolidge’s biographer tells it:

Mrs. Coolidge returned from her morning’s shopping shortly after noon on January 5, 1933. The Beeches [the Coolidge’s house in Northampton] was coated in ice. The trees were gaunt with winter hoar. She went upstairs to summon her husband for lunch and found that he was dead. He lay on his back in his shirt sleeves in his dressing-room and his face had a peaceful expression. She knelt beside him and saw at once that he was gone. She ran down to the landing and called to Harry Ross, Mr. Coolidge’s secretary: “My husband is dead.”  […]

END_OF_DOCUMENT_TOKEN_TO_BE_REPLACED

Movie scriptwriters could scarcely have imagined a cuter scenario of her meeting her future husband Calvin: while watering flowers outside the Clarke School for the Deaf in Northampton, Massachusetts, one day in 1903, she happened to look up at the open window of Robert N. Weir’s boardinghouse and caught a glimpse of Calvin Coolidge shaving in front of a mirror with nothing on but long underwear and a hat. She burst out laughing at the sight; he heard the noise and turned to look at her. It was their first meeting, and he was smitten. After a more formal introduction sometime later, the two were quickly attracted to each other.

From all accounts, theirs was a happy marriage, joining two people with very different personalities. It can’t always have been easy to be with the taciturn, dry Calvin, but for all his kidding, some of it at her expense, the 30th president well knew what a treasure he had in her, and affirmed as much in his autobiography, “for almost a quarter of a century she has borne with my infirmities, and I have rejoiced in her graces.”

Grace was a much beloved First Lady, whose personality was a contrast to her husband’s often dour persona. Her life was not untouched by tragedy – she lost her younger son, Calvin Jr. when he was only 16, and she survived her husband’s untimely early passing by 24 years, staying largely out of the public limelight.

Rebecca the Raccoon, with friend

Too cute to eat? The Coolidges were known as an animal-friendly family, but White House personnel wasn’t too pleased with one particular pet of Calvin and Grace’s, for it constantly tore up clothing, particularly the First Lady’s silk stockings. This little rascal was a raccoon named Rebecca, and she was, as raccoons go, fairly well behaved, as the president stated in one of his press conferences.

Originally a Thanksgiving present for the Coolidges, intended as dinner by the Peruvian diplomat who made the gift, the Coolidges could not bring themselves to eat her but rather had a comfy tree house built for her on the White House grounds. The omnivorous animal had her meals – preferably eggs, chicken, and cream- in a White House bathroom. “In the bathtub, with just some water and a bar of soap to play with, she could amuse herself for hours,” wrote Grace Coolidge.

His daily work done, president Coolidge enjoyed a walk with Rebecca on a leash. But after the adventurous animal managed to sneak out a few times for a bit of sightseeing, the Coolidges feared for her safety and gave her to the Washington Zoo.

The excellent Ghosts of DC blog has posted for your viewing pleasure a charming little silent movie of the 1929 inauguration of Herbert Hoover. While I’m not a great fan of the 31st president, this little gem of a newsreel has some nice shots of his predecessor Calvin Coolidge and Coolidge’s wife Grace – and it closes with a sweet vignette of the Coolidges waving Washington, D.C. goodbye from the back of a train; they’re very obviously happy to be departing and the ex-president has an uncharacteristically big smile on his face to match that of the former First Lady.

The White House grounds were opened to throngs of children for the Easter Egg Roll in 1927 – the president did not take part in the rolling, but waved to his young visitors from a safe distance:

Mrs. Coolidge delighted the crowd by displaying her pet raccoon. Apparently, though, the raccoon failed to displace the Easter Bunny as a seasonal mascot:

A well-dressed couple, the Coolidges attended Easter Sunday services in 1927 (all photos from the digital archives of the Library of Congress):

I just can’t keep up with Fran Becque – she keeps coming up with interesting stuff on Grace Coolidge over at her blog, so I’m very happy to direct y’all over there for her latest.