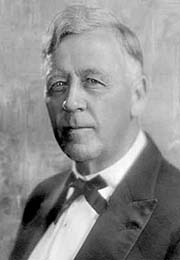 John Garibaldi Sargent was born in Ludlow, Vermont, on October 13, 1860. He graduated from Black River Academy in 1883, a few years before Calvin Coolidge did, and went on to earn a B.A. degree from Tufts College in 1887, and a M.A. in 1912. He studied law in the interim and was admitted to the Vermont bar in 1890. Early in his college years, Sargent became active in the Zeta Psi Kappa Society; through the fraternity’s activities he was introduced to many of Boston’s influential politicians, later including the Coolidges.Sargent joined the firm of Stickney, Sargent & Skeels, then served as State’s attorney in Windsor County, Vermont, until 1900. From 1902 to 1908, he argued the majority of his cases in federal court, and he established a national reputation as a trial lawyer.

In 1908 Sargent was named attorney general of Vermont. While in office, he was involved in one of the leading cases in the history of Vermont’s highest court. In Sabre v. Rutland Railroad Co. (1912), attorneys for the railroad argued that the powers enjoyed by Vermont’s Public Service Commission (which regulated railroads) violated the Vermont Constitution by commingling legislative, executive, and judicial functions. Sargent, arguing for Sabre and the state, disagreed. His position was that the Separation of Powers was only violated when one branch exercised all of the powers of another branch. The court agreed with Sargent and recognized the quasijudicial powers of executive-branch state agencies. The decision led the way for commissions and boards across the country to wield court-like powers.

Sargent came to a prominence he had never sought, because Charles Dawes, Coolidge’s Vice President slept through a tie vote in the Senate.