Calvin Coolidge was only a relatively young 56 when he relinquished the presidency in 1929, yet his health was none too robust and he did not take on too much strenuous work in his retirement years.  For a while he wrote the widely syndicated newspaper column “Calvin Coolidge Says,” but the strain of having to write it wore on him and he disliked the constant press of deadlines.

tCoolidge did take on a number of board memberships or trusteeships, but his one instance of post-presidential government service occurred when president Hoover in 1932 appointed him chairman of the non-partisan National Transportation Committee, whose task it was to make recommendations concerning the burgeoning problems of the transportation industry. The committee also included financier Bernard M. Baruch and former New York governor and 1928 Democratic presidential candidate Alfred E. Smith.

Coolidge participated in several meetings of the commission in New York, the accompanying picture was taken on one of those occasions.

He died before the committee released its report, but biographer McCoy reports that his “suggestions went well beyond those of the committee. He called for a high-powered bureau in the Department of Commerce or even a full-fledged Department of Transportation that would have regulatory jurisdiction over all forms of interstate transportation.” I suppose that’s one blow against those who consider Coolidge a champion of small government or perhaps even a closet Libertarian…

Baruch and Smith attended Coolidge’s funeral, and Baruch, who later served on FDR’s brain trust, made a statement about Coolidge’s character that nicely encapsulates some of what I feel are central personality characteristics of the 30th president:

“He handled everything with such rare good taste and judgment, and with so much consideration for everybody, that he won the real affection of us all… Many people thought this sweetness and consideration, as shown in his latter days, were due to his approaching illness, but my contacts with him in other matters made me believe that he always was the human being – very shy, but always considerate of his associates.” 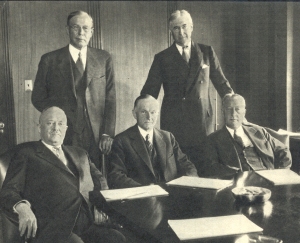 Coolidge chairing the Transportation Committee in 1932, with Bernard Baruch standing at right, and Alfred E. Smith seated at right

3 thoughts on “Coolidge on the Railroad Committee”