Thanks to Jim Cooke, who not only is as knowledgeable a source on all things Coolidge as they come but also does an exceptional job (so they tell me) of impersonating the 30th president, I’m upgrading this post from a “random Coolidge pic.” Jim confirmed my hunch that the straw-hatted gentleman on the left is Col. Edmund Starling who headed Coolidge’s Secret Service detail. Starling, who had previously served presidents Wilson and Harding was retained by Coolidge in a manner he reports in his memoir “Starling of the White House” as follows:

(Following his return from the burial of president Harding at Marion, Ohio, Starling) “was completely exhausted and did not report for duty for another day. Then, at a quarter of six in the morning, I went to the Willard Hotel and waited outside the President’s suite on the third floor. I had heard that he was an early riser. At a quarter after six the door opened, and he stepped out, dressed to go for a walk. He recognized me and said: “Good morning, Colonel Starling, I’ve been wanting to see you. I want you to stay with me during my administration.” (…) “I will be most happy to remain with you,” I said. “I will consider it an honor to serve you in any way.”

Starling regularly accompanied the president on his morning walks. He was distressed to find Coolidge took no other exercise, and found his posture wanting:

Moreover, he walked with his head thrust forward, his hands clasped behind him, his shoulders hunched, and his chest sagging. I finally got up enough courage to tell him that since he walked for a healthful purpose he should not defeat that purpose by his posture. “It will do you so much more good,” I said, “if you will keep your head up and your shoulders back, with your arms swinging. The important thing is to stimulate circulation in the chest.” He paid no attention to me, and for a week continued to walk as before. Then one day he suddenly struck out with his head stuck up in the air and his arms flailing, so that I had to walk at least three feet from him, I said nothing. After a while his arms fell into a normal swing. He never walked again with them behind him.

So I suppose what we are seeing here is Coolidge after accepting the Starling regimen. At least the president doesn’t seem to be flailing, although Starling keeps a safe distance.

Picture courtesy of the Library of Congress digital photography collection. 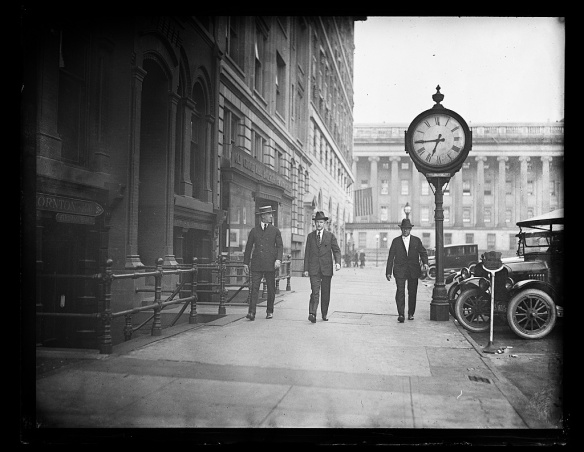 3 thoughts on “A President Takes A Walk”