Amity Shlaes is tweeting tidbits from Coolidge’s comings and goings as a countdown to the publication of her all-new biography of the 30th president. Yesterday, she shared that Coolidge bought shares in Standard Brands at the time of its creation by merger. The financial news media of the day touted this and other food company stocks as being depression-proof, much as stocks of food and other consumer staples firms have been thought of ever since. I’m not sure if Coolidge had a sizable or diversified stock portfolio; I expect he owned shares of New York Life, where he was a director,

but that he was largely averse to shares or at any rate his sense of propriety prohibited him from owning stock while holding office – which was most of his life before 1929.

Looking into the history of Standard Brands (a company that disappeared from the stock ticker through various mergers and acquisitions), it certainly was a powerhouse marketer. A creation of the financial wizards at J.P. Morgan, it was formed in 1929 by the amalgamation of various companies with respectable histories, most notably the Fleischmann Company (makers of products as diverse as yeast and gin), the Royal Baking Powder Company (makers of, yes, baking powder), and the Chase & Sanborn Coffee Company, a coffee roaster with a then well-known brand. The resulting company prospered through the Depression, finding new markets for its products (”Yeast for Health”) and expanding existing product lines. Between 1929 and 1981, when Standard Brands merged with Nabisco, Standard Brands acquired several more important businesses, including Planters Nut & Chocolate Co. in 1961 and the Curtiss Candy Company, makers of the Baby Ruth candy bar, in 1964. It was just behind the likes of General Foods or Procter & Gamble among the largest packaged brands marketers. Penultimately, it merged with Nabisco in 1981 to form Nabisco Brands, then merged with R.J. Reynolds to form RJR Nabisco…following which its history becomes convoluted due to the leveraged buyout mania of the 1980s and 90s. Most of the original parts have been sold to various parties, so that the Nabisco that is a part of Kraft Foods today bears little resemblance to the Standard Brands of 1929 or even 1960.

I don’t have the data to prove it, but a stock bought in what was essentially an IPO in 1929 probably was lower in 1933 when Calvin Coolidge passed away. But if his widow Grace held on to the stock, it very likely proved to have been a good investment, as indeed were most stocks if you had the foresight and the financial wherewithal to hold on to them through the trough of the Depression. I’m reminded of an anecdote from the Depression era,where Charlie Chaplin made fun of Irving Berlin for having held on to his stock portfolio. At the time, Chaplin looked wise for having sold out most of his then-losing stocks, but in the long run (and Berlin lived to be 101) the composer had the last laugh. Turns out Chaplin should have stayed silent! 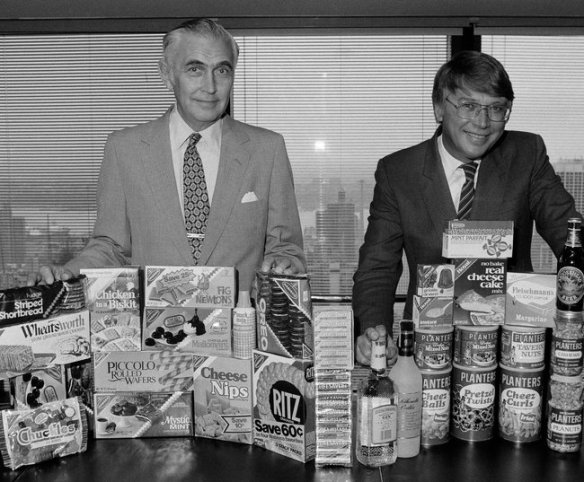 Long after Coolidge’s day, image shows Nabisco chief Bob Schaeberle, left, and Standard Brands CEO F. Ross Johnson at the time of the companies’ merger in 1981, with an assortment of major brands