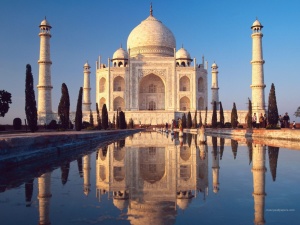 A taj of madness

People who travel the world are drawn to the vast, the splendid, the unique edifices that serve as mementos to the rulers (tyrants, really) of yesteryear. Splendid though they are, the pyramids, palaces and temples never fail to remind me of the backbreaking, often murderous, toil and the extortion of taxes that went into their construction, and I’m surely not the only one to experience mixed feelings when contemplating these timeless wonders. Leaving aside for a moment those marvels that were created to celebrate one deity or another, most of the rest were built with the immortal, even eternal, glory of individual kings, rulers, or princes in mind.

And while we may think that we have long left behind those dark days, the democratically elected rulers of today have their “place in history” in mind as much as any despot of old. Their place in history may rest on a breakthrough piece of legislation, never mind its cost to future generations. It may rest on a celebrated foreign treaty, never mind the long-term consequences. It may rest on an “investment” in public rail, or solar energy, that is in tune with the zeitgeist but will never pay back its cost. In Europe, it may rest on keeping an increasingly shaky union of very different countries together at all cost. And sometimes, in a faint of echo of olden days, it may rest on grandiose buildings schemes whose cost rivals that of medieval palaces, even if they can’t begin to match their historic antecedents’ beauty and craftsmanship.

While kings and princes of old were merely and overtly egoistically concerned with their own comfort, well-being, and glory, most rulers of today coat their ambition with a veneer of publicmindedness, of a “vision” for the nation. Lincoln may have said, “Where there is no vision, the people perish.” But in truth, the people should be very wary when their leaders espouse grandiose visions. Ultimately, what are political visions but the ideas of one person or at most a small class of people as to where they feel the nation ought to be headed. As such, leaders with visions suffer from delusions of grandeur, of knowing better what the direction of the nation should be than to leave it to the aggregate individual decisions, dreams and plans of the citizenry. Imagine (cue John Lennon here) there had been no kings in bygone days, no princes to decree that citizens must pay taxes and work to erect grand palaces. Would we have those palaces today? No we wouldn’t. But it is possible that we might have equally wonderful creations of free men and women who led better lives free from oppression and thus were able to build small “palaces” for themselves. I visited the wonderful city of Görlitz in Germany just recently – the whole town is a jewel made up of individual houses in varying styles ranging from the gothic to the art déco periods. It can stand proudly beside the palaces that dot the Loire…or the Taj Mahal, for that matter.

How much less grandiose, yet how infinitely more democratic is the occasional leader endowed with enough humility to not formulate grand visions, schemes and projects. How refreshing to find one who is content with doing the day’s work, comfortable knowing that he is not a great man, willing to let the people flourish by getting out of their way, lowering their tax burden, reducing regulations. From all I have read about Calvin Coolidge, he was precisely such a man. It is unlikely that we will see his like again.