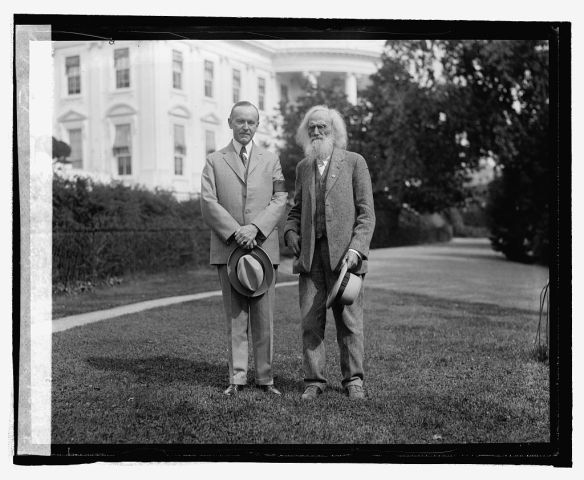 In these pictures, dated Oct. 7, 1924, president Coolidge appears pleased to meet Ezra Meeker, a man whose name rated a big “????” when I first encountered it. So I did some cursory research (and by that I mean I googled him) and this is his remarkable history:

Born on Dec 29, 1830 in Huntsville, Ohio Ezra married his childhood sweetheart, Eliza Jane Sumner in 1851. The young family joined the more than 50,000 Oregon Trail “immigrants” in the summer of 1852 and first settled in Kalama on the Columbia River.

They moved to Puget Sound in 1853 and built a cabin on McNeill Island. After the Indian War of 1855, however, Meeker joined his father and brother in a mercantile venture in Steilacoom, a venture that tragically failed when his brother Oliver was lost at sea coming back from California with supplies that had consumed all of all their funds. Broke and destitute, with nothing but an old blanket as a coat, Ezra used his last money to make improvements to a squatter’s claim in the Valley.

Meeker cleared his own land and hired himself out to his neighbors as a laborer. A man who was always fond of liquor, he began planting hops with his father, a crop that was destined to put the Puyallup Valley on the map.

He continued working for his neighbors, and became a hop broker, selling his won and his neighbors’ crops on the world market. He traveled to England four times in four years in the early 1880’s, and he and Eliza Jane were even presented to Queen Victoria. He planned the town of Puyallup in 1877, and was the town’s first mayor.

After an infestation of hops  with aphids destroyed his crops in 1891 and nearly ruined him, he tried a number of ventures, including dehydrating fruits and vegetables, working on packaging milk in paper containers, and four largely unsuccessful trips to the Klondike looking for gold.He did manage to keep his extravagant mansion. He tried various ventures, most of them losing more of his money, until he decided, at the age of 76, to focus on a goal he had had for some time; the marking ans memorializing of the historic Oregon Trail. He outfitted an old covered wagon with two oxen and followed the trail back east. He became a modern day Johnny Appleseed, traveling the western rangeland planting monuments and sewing seeds of patriotism and nostalgia to mark the Oregon Trail. President Teddy Roosevelt met him in Washington, D.C. and promised Ezra he would ask Congress for money to mark the trail.

Meeker made four more trips over the Oregon Trail. Once more by wagon train, by car, by rail and, in 1924, by airplane. This last trip, at the age of 94, he made in an open-cockpit army plane, flying from Vancouver, Washington to Dayton, Ohio. The next day, he rode in a parade with Orville Wright, then flew to Washington to meet president Coolidge and to present him with a planto designate a national highway commemorating the Oregon Trail. At the time of his death at almost 98 years of age onDec. 3, 1928, Meeker was planning a final drive along the trail.