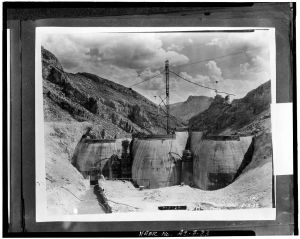 Coolidge Dam construction photo, May 1928 (digital collection of the Library of Congress)

Of all the edifices erected in honor of that most unassuming of presidents, Calvin Coolidge (there are not too many), none are more impressive than Coolidge Dam. Constructed between 1927 and 1929, and dedicated March 4, 1930, the dam is located on Arizona’s Gila river and stores its water for use by the San Carlos Irrigation Project (Gila River Indian Reservation). The original intent was to address the water needs of the Pima and Maricopa native Americans on the Gila River Reservation as well as the neighboring Anglo American communities – and to solve the conflict between those groups over water reserves. It should be noted that the water needs of the native American Pima “Indians” were only considered when they coincided with those of “white” settlers. Commenting at the dedication of the dam, satirist Will Rogers pointedly quipped that “you folks got this dam built by using the Indians as an alibi.”

In December of 1923, Arizona Senator Ralph Cameron introduced a bill to “continue construction of the San Carlos Federal Irrigation Project” which was passed unanimously by the Senate and the U.S. House of Representatives. The Arizona delegation, perhaps unsure of president Coolidge’s support for the project, presented the bill as authorization for the construction of Coolidge Dam, and the president signed the legislation into law on June 7, 1924.

Coolidge Dam was the first water storage facility ever built using a so-called multiple dome design. It is unique in that its design employs a variation on the successive arch design. Three large domes, anchored by two buttresses, stand at approx. 250 feet, impounding the Gila river for 23 miles when full. The design team consisted of Chief Engineer W.M. Reed, his successor Herbert W. Clotts, and Charles R. Olberg, Assistant Chief Irrigation Engineer, all of the Indian Irrigation Service. Because of several novel elements and processes used to construct the dam, it was completed one year ahead of schedule.

The dedication ceremony was held March 4, 1930. In attendance were former president Calvin Coolidge and his wife, Arizona Governor John C. Phillips, California Lieutenant Governor H.L. Carnahan, Edgar B. Merritt, Assistant Commissioner of Indian Affairs, and satirist Will Rogers, along with approx. 3,000 spectators who witnessed the smoking of the peace pipe between the Apaches and Pimas and heard speeches by Coolidge and Rogers. The dam and hydroelectric power plant are still in use today.

There is fine set of recent photos published on Al Levenson’s “A Year on the Road”  BLOG.