I’m using the upcoming (Apr. 2 and 3) semiannual general conference of the LDS Church as an admittedly thin pretext to note that, all publicity surrounding Mitt Romney aside, Mormons were prominent in U.S politics a century ago and in Coolidge’s day as well.

While one prominent turn-of-the-century Utahn, B.H. Roberts, was denied the seat he had won in the U.S. House of Representatives because he practiced polygamy, Reed Smoot , not tainted by a multiplicity of wives, was elected to the U.S. Senate as a Republican in 1902 and served until 1933. Serving as Senate Finance Committee Chairman from 1923 to 1933, he certainly worked with president Coolidge on many occasions. His claim to fame (or infamy) came late in his Senate career as co-sponsor of the 1930 Smoot-Hawley Tariff, widely understood to have exacerbated the Great Depression. Smoot concurrently served as an apostle of the LDS Church, a body of 12 senior church leaders, from his appointment to that post to his death in 1941. 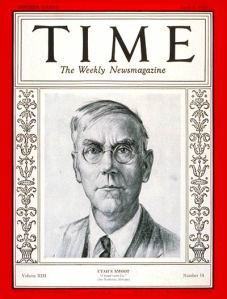 Reed Smoot made the cover of TIME

A lawyer by training (the J. Reuben Clark Law School at Brigham Young University is named in his honor), he started out in government service in 1906. After stints as solicitor general in the State Department and in the office of the U.S. Attorney General, Clark served as Under Secretary of State in the Coolidge administration. Most notably, he authored the Clark Memorandum on the Monroe Doctrine, a conciliatory statement that repudiated the idea that the U.S. was entitled to the arbitrary use of power in its Central and South American “back yard”. This document is also the first to use the term “national security.” In the Hoover administration, Clark served as ambassador to Mexico from 1930 – 1933. In 1934, he was called as an apostle in the LDS Church, and served as a First or Second Counselor to several of the Church’s Presidents (or Prophets) between 1934 and his death in 1961.

Since that time, Mormons have been active and prominent in U.S. politics time and again, the most notable example being EzraTaft Benson, who served as Dwight D. Eisenhower’s Secretary of Agriculture and went on to become LDS Church President. Today, the church is represented in Congress by Sens. Orrin Hatch and Harry Reid, to name just two.