Colonel Edmund W. Starling’s book, Starling of the White House, is a treasure trove of Coolidge anecdotes collected by Col. Starling, head of the White House Secret Service detail and perhaps the one person closest to Coolidge during his presidential years. Starling served 5 U.S. presidents from Wilson to FDR, and while he held Wilson in particularly high esteem, he esteemed Coolidge highly and this shines through the pages of the book. Summing up his assessment of Coolidge, Starling writes:

Calvin Coolidge may or may not have been a great President. That is for history to decide. To me he was fundamentally and primarily something which I treasure above all the things of earth: he was a good man. He was thoughtful, he was intelligent, he was sentimental, he was wise. There were times when he was irascible; there were occasions when I was glad to be away from him. But I found him in the large and full portions of existence an admirable and a satisfying man, a peaceful and pleasing and loyal friend. His feelings, like his thoughts, ran deep and did not swerve. I liked him as a man; I loved him as a friend.

Here’s one anecdote about a VERY short Coolidge speech:

Returning from Omaha (…), after attending the American Legion Convention, our train stopped for coal and water at a small town on the way to St. Louis. Such a large crowd had gathered to see the President that I went into his private car to tell him. He was seated on a big lounge, a table in front of him. His elbows were on the table, his hands were cupped about his chin. He was fast asleep. I tapped him on the shoulder and said, “Mr. President, there are about twenty-five hundred people waiting outside to see you.”

Without a word he got up, smoothed his hair, straightened his jacket, and followed me to the observation platform. He gave the people his official smile and they applauded. Then Mrs. Coolidge appeared and was given an even greater ovation. This was too much for the leading local citizen, who had apparently organized the reception. (…) Stepping up on one of the rails, with a hand one someone’s shoulder to steady himself, he shouted: “Now, you folks keep quiet. I want absolute silence. The President is going to address us.”

Silence ensued. With a gesture of sacrifice and charity the big shot turned to the little fellow [the President] and said: “All right, Mr. President, you may speak now.” Just then the train began to move away. There was a hiss of air as brakes were released. Gently we rolled out of the station.

The President, still smiling, raised his hand to the crowd and said: “Goodbye.”

This I believe to be the shortest Presidential speech ever made. 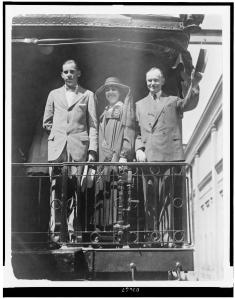